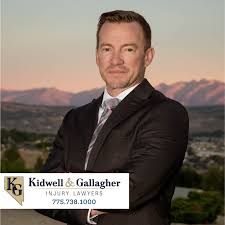 In 2018, the State Bar of Nevada selected Mr. Kidwell as one of the five co-founding board members to serve on the State Bar of Nevada Board of Workers’ Compensation Specialization Committee. In the same year, the 5-member Committee elected Mr. Kidwell as Chairman of the Workers’ Compensation Specialization Committee.

Mr. Kidwell has lobbied and testified before the Nevada Legislature on behalf of the Nevada Justice Association on important issues related to Nevada’s workers’ compensation system.

Mr. Kidwell was born and raised in Elko, Nevada. After graduating from Elko High School, he earned his undergraduate degree from the University of Nevada at Las Vegas, then obtained his Juris Doctorate degree from Gonzaga University in Spokane, Washington. Craig was admitted to the Nevada state bar in 1998 and is also admitted to the United States Court of Appeals for the Ninth Circuit.