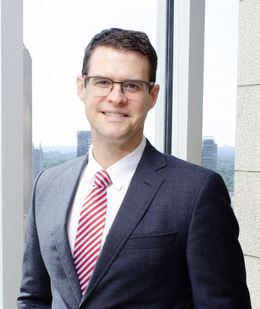 Michael began his professional career as a client representative with IBM before resigning to attend law school at Georgia State University in Atlanta. He spent three years representing employers and insurers at the insurance defense law firm of Drew, Eckl & Farnham in midtown Atlanta before joining the legal team at Liberty Mutual Insurance Company for two years. These five years taught him how insurers evaluate injury claims in terms of validity and financial exposure in addition to teaching him about the nuances of practicing injury law throughout the great state of Georgia.

In 2009, Michael started Moebes Law, LLC and has passionately represented the injured ever since. In fact, he has recovered millions of dollars and won countless medical procedures in the course of his representation of injured workers and veterans since starting his firm. He is active in the National Organization for Veterans Advocates, the Workers Injury Law and Advocacy Group, and numerous local and national bar organizations. He’s a registered neutral by the Georgia Supreme Court as well.

Michael has been named a “Rising Star” (before he was over 40) and then a “Super Lawyer” by the Georgia “Super Lawyers” organization multiple times, an honor given to 2.5% of attorneys in their practice field as voted upon by their peers. He has also been named among the “Legal Elite” by GeorgiaTrend magazine. He has lectured at the Georgia Trial Lawyers annual convention, the “Fundamentals of Law Practice” course at Georgia State University College of Law, and the “National Return to Work Week” radio show. In 2013, he was interviewed for the companion guide of “Solo By Choice,” a guide to starting one’s own law firm.

When not practicing law, Lieutenant Colonel Moebes served as a Medical Service Corps officer with the U.S. Air Force Reserves for 23 years before retiring in 2020. He deployed three times in support of Operation Iraqi Freedom: twice to Balad Air Base, Iraq and once to Andrews AFB, Maryland. In the course of his decorated military service, he facilitated the aeromedical evacuation of thousands of wounded warriors, and he participated in the Jessica Lynch rescue mission in 2003. He was featured in cover story articles in the Daily Report newspaper after both Iraqi deployments. The three-part “Iraq Diary” article published in October 2003 won national recognition.

When not serving his country or his clients, Michael enjoys traveling, writing, and time with his three young children, wife, and dog of questionable lineage. He and his family are active members at Buckhead Church and support several local charities, including Wellspring Living, the Sandy Springs Conservancy, and the Anti-Defamation League; he was selected to the Glass Leadership Institute for the ADL. He serves as Treasurer of the Board for Act 3 Theater in Sandy Springs and Secretary for the Sandy Springs Bar Association. He was chosen for Leadership Sandy Springs in 2013 (becoming an LSS Ambassador in 2014).